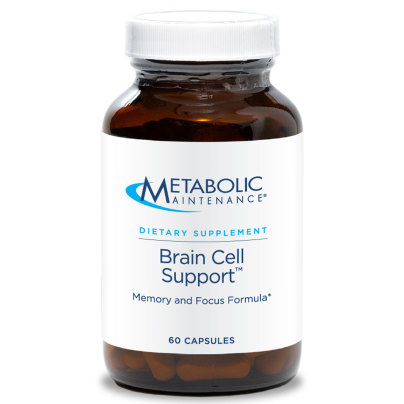 Brain Cell Support
-Brain Cell Support is one of the most potent combinations of nutrients and herbals for support of normal memory, mood and focus. The ingredient Cognizin Citicoline has been researched at Harvard University. This powerful nutrient is combined with acetyl L-carnitine (preferred for neural support when compared to L-carnitine), DMAE, phosphatidylserine, and the brain supporting botanicals ginkgo biloba and gotu kola to help support healthy production of neurotransmitters (including acetylcholine) which contribute to normal mood.* Citicoline is often called a brain nutrient because it
plays a role in the production of several important neurotransmitters, including acetylcholine, dopamine and noradrenaline. It also helps maintain the integrity of neuronal cell membranes—a function also performed by the phosphatidylserine in this formula. Citicoline and acetyl L-carnitine support energy production in the brain, specifically in the frontal cortex. Citicoline has been shown to support memory, attention, and behavior in mentally healthy older adults. The added ingredient DMAE crosses the blood brain barrier and is a precursor to choline. It may also increase levels of the memory neurotransmitter acetylcholine.*

Two (2) capsules daily with meals as a dietary supplement, or as directed by
a Doctor.

No excepients, preservatives, binders, or fillers. Nothing but pure active ingredients.

*This statement has not been evaluated by the Food and Drug Administration. This product is not intended to diagnose, treat, cure or prevent any diseases.