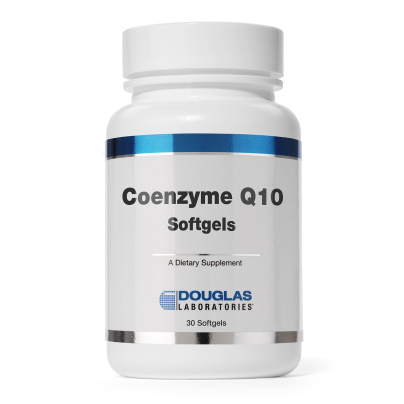 FUNCTIONS Co-Enzyme Q10 (ubiquinone) is an important rate-limiting cofactor in the mitochondrial electron transport chain, the biochemical pathway in cellular respiration from which adenosine triphosphate (ATP), the form of energy used by the body, is derived. Since cellular activities are dependent upon energy, co-enzyme Q10 is crucial for the efficient functioning of nearly every cell. In addition to its well-established function as a component of the mitochondrial electron transport chain, coenzyme Q10 has in recent years acquired increasing attention regarding its antioxidant properties. CoEnzyme Q10 occurs in all cellular membranes as well as in blood serum and in serum lipoproteins. As a lipidsoluble antioxidant, co-enzyme Q10 efficiently protects membrane phospholipids and serum low-density lipoproteins from lipid peroxidation. And, as recent data indicate, it also protects mitochondrial membrane proteins and DNA from free radical induced oxidative damage. These effects of co-enzyme Q10 are independent of those of other antioxidants, such as vitamin E; although co-enzyme Q10 can also extend the functions of vitamin E by regenerating it from its oxidized form. Tissue co-enzyme Q10 levels are regulated through the mevalonate pathway, increasing with various forms of oxidative stress, and decreasing during aging. Related to its antioxidant properties, co-enzyme Q10 is important for normal immune function. This has been shown in a number of experimental and clinical studies. Healthy people have the ability to synthesize adequate amounts of co-enzyme Q10. According to Dr. Karl Folkers and other researchers, humans can synthesize co-enzyme Q10 from the amino acids tyrosine or phenylalanine and mevalonic acid, all of which are abundant in the body. However, the synthesis is a complex process involving 15 separate steps which require many enzymes, nutritional mineral cofactors, and vitamin coenzymes. As a result, the biosynthesis of co-enzyme Q10 in the human body requires a good diet – one that is high in vitamins, minerals, and other nutrient factors. Yet, it has been shown by NHANES I and II studies that many Americans do not consume an adequate diet. Rather, for many, dietary intake of water soluble vitamins, vitamin A, and some minerals and trace elements is insufficient. Many of these nutrients are essential for the biosynthesis of co-enzyme Q10. Thus, it is not surprising that the nutritional status of co-enzyme Q10 tends to decline with advancing age. In addition, it has been shown that in disease states, nutrients from food sources may not be readily absorbed or bioavailable. According to Folkers and other experts, co-enzyme Q10 should be considered an essential nutrient, as it is well established that co-enzyme Q10 is essential for the health of every cell in the human body.

INDICATIONS Co-Enzyme Q10 softgels may be a useful dietary supplement for those who wish to support their body’s own production of co-enzyme Q10.

Suggested Use:
As a dietary supplement, adults take 1 to 2 softgels daily, or as directed by your healthcare professional.

Note: Tamper resistant package, do not use if outer seal is broken or missing.

CoQsol 200mg Plus E, A and Rice Bran Oil