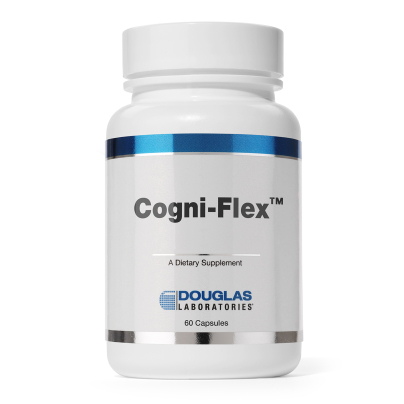 Cogni-flex, provided by Douglas Laboratories, is a unique combination of nutrients and herbs (huperzine A, Ginkgo biloba, phosphatidyl serine, and acetyl-L-carnitine) which work in concert to maintain and enhance brain and nervous system functions, including those involved in mental alertness, clarity, and memory retention. These positive effects of the four components of Cogni-flex upon structure and function of the nervous system are supported by numerous scientific/clinical studies

FUNCTIONS The four nutrients in Cogni-flex support the structure and function of cognitive processes in several ways. They support neurotransmitter metabolism, enhance vascular circulation to the brain, and help maintain structure and function of nerve cell membranes. Huperzine A: An extract of the Chinese club moss, Huperzia serrata, huperzine A has been used in Chinese medicine for centuries. It is an effective inhibitor of acetylcholinesterase, the enzyme that degrades acetylcholine, the neurotransmitter important for normal memory and learning function. Huperzine A may help maintain cognitive function that has been degraded by a reduction in the brain’s functional levels of the neurotransmitter acetylcholine. Ginkgo biloba: Flavonoid compounds and terpene lactones in the ginkgo leaf help regulate the structural tone and elasticity of arteries and capillaries. As powerful antioxidants, the ginkgo flavonoids counteract the deleterious actions of free radical accumulation which impairs functional cellular energy production and nerve transmission. Ginkgo biloba extract is also reported to inhibit the tendency of red blood cells to stick together (“clumping”), thereby enhancing the functional fluidity of the blood. Improving the functional circulation to the brain and other parts of the body allows for better oxygen and glucose uptake, with subsequent enhancement of memory and mental functions. Phosphatidylserine: This phospholipid, found in high concentrations in the nervous system, helps maintain functional fluidity of nerve cell membranes, thus providing for optimal transport of nutrients and other compounds across the cell membrane. It is also used in the repair and regeneration of nerve cells. Phosphatidylserine also appears to help the body counterbalance excessive release of adrenocorticotropic hormone (ACTH), adrenaline, and cortisol which are released in response to stress. Acetyl-L-carnitine: This acetylated high energy ester of the amino acid L-carnitine contributes its acetyl group to the production of acetylcholine, the primary neurotransmitter for memory and thought. The enzyme that makes acetylcholine from acetyl groups and choline is choline acetyl transferase. The activity of this important enzyme has a tendency to decline with age, causing low acetylcholine levels which in turn are thought to contribute to the impairment of brain function that is associated with aging. Research has also found that acetyl-L-carnitine is active in optimizing the functioning of cerebral blood flow, as well as of nerve cell membranes.

INDICATIONS Cogni-flex capsules may be a useful dietary supplement for those who wish to support the healthy functioning of their mental processes.

As a dietary supplement, adults take 1 capsule daily or as directed by your healthcare professional.