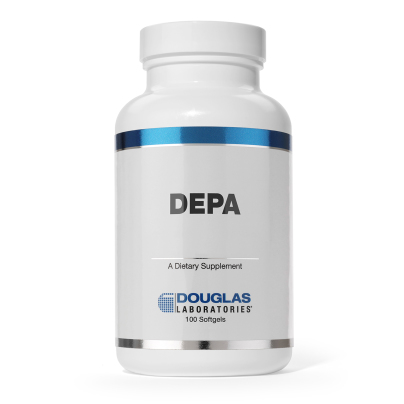 DEPA, provided by Douglas Laboratories, contains a marine lipid concentrate that has been processed by molecular distillation. DEPA is an excellent source of omega-3 fatty acids, providing eicosapentaenoic acid (EPA, 18%) and docosahexaenoic acid (DHA, 12%) in their natural triglyceride form

FUNCTIONS Typical diets in developed countries deliver large amounts of saturated fatty acids and the polyunsaturated omega-6 linoleic and arachidonic acids and low levels of omega-3 fatty acids. Throughout evolution, humans were accustomed to diets providing roughly equal amounts of omega-6 and omega-3 fatty acids. However, during the last 200 years, the ratio of dietary omega-6:omega-3 fatty acids increased from about 1:1 to 20- 25:1. Leading health professionals now recommend ratios between 4:1 and 10:1. A healthy balance of dietary omega-6 and omega-3 fatty acids appears to be a prerequisite for normal immune function. Dietary linoleic acid (18:2 omega-6) is a precursor to arachidonic acid (20:4) which in turn is a precursor for pro-inflammatory prostaglandin E2, leukotriene B4, and platelet aggregating thromboxane A2. The omega-3 fatty acids EPA and DHA provide a natural counterbalance, because they serve as precursors for the anti-inflammatory prostaglandins E1 and E3, and decrease the formation of prostaglandin E2 and thromboxane A2. Among other factors, sufficient dietary levels of EPA, DHA and other omega-3 fatty acids are also important in the regulation of normal blood lipoprotein and cholesterol levels.

NO solvents or chemicals used. NO STARCH, SUGAR, WAX OR PRESERVATIVES.