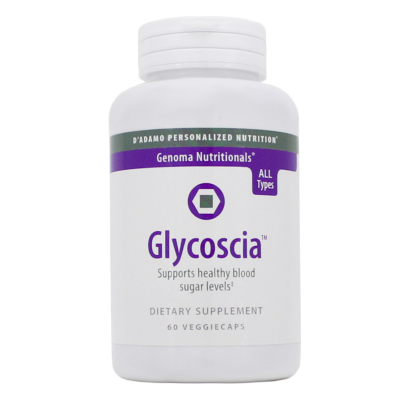 Glycoscia is an innovative, one-of-a-kind nutriceutical formula designed by Dr. Peter D'Adamo as an aid to weight loss, the maintenance of blood sugar levels already in the normal range, and the overall enhancement of a healthy metabolism. Originally developed for use in his clinic, the key ingredient in Glycoscia is the Ayurvedic herb Salacia reticulata, a traditional herb that has been used for thousands of years in Ayurvedic medicine, in addition to four other synergistic co-factors.

Modern research has shown that Salacia plays an important role in supporting natural carbohydrate metabolism. When we consume sugars and starches, a very small amount is broken down by the enzymes in our saliva. However, by far the greater amount is metabolized in the small intestines, where the assimilated sugar can either be utilized immediately for the production of energy, or saved as fat for later use. One of the ways this is controlled is via special hormones within the cell called PPARs (Pee-Pars). The best studied of the PPARs is called PPAR-gamma (PPARG). PPARG is a key regulator of fatty acid storage and glucose metabolism; sort of like a traffic policeman, directing vehicles in either of two directions: 'burn carbs' or 'store fat'. Studies have shown that Salacia root exerts a healthful effect on PPARG, helping to maintain and balance its normal, optimal function.

In addition, in certain individuals, sometimes called 'hyper-assimilators,' a percentage of the undigested carbohydrate from a meal will reach the lower intestine and be broken down into simple sugars, which will then also be assimilated and either stored as fat or burned as energy. These individuals are known to have higher levels of a class of enzymes called glycosidases. Salacia has been shown to help insure normal, healthy levels of this enzyme, especially when combined with a sensible diet and exercise program.

Suggested Use:
Take 1 capsule, twice daily or as directed by a physician.