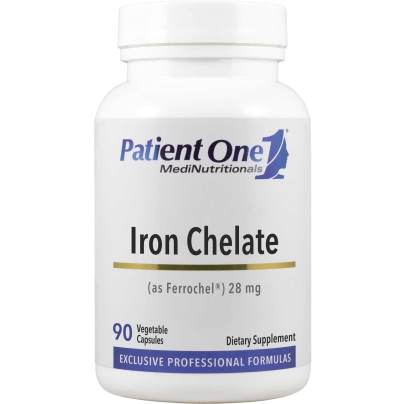 Unique Properties
Patient One Iron Chelate supplies 28mg of iron, an important component of hemoglobin, a protein in red blood cells that delivers oxygen to tissues throughout the body. Iron is also a part of myoglobin, a protein that helps muscle cells store oxygen, and ferritin, the bodys main iron storage protein found in the intestines, liver and spleen. Iron bound to ferritin is readily available to meet the bodys demands.

Conventional iron supplementation, including forms such as ferrous sulfate, can cause GI side effects – including nausea, vomiting, constipation, diarrhea, and dark-colored stools – because these conventional forms are poorly absorbed. Our formula provides Ferrochel® brand iron bis-glycinate, which was developed using unique patented chemistry, allowing it to be absorbed rapidly from the lumen of the intestines into mucosal cells and then released for transport throughout the body. The intestinal mucosal tissue tightly controls the release of Ferrochel, supporting the safety profile of this iron amino acid chelate.

Ferrochel® (patented iron bisglycinate chelate)
Ferrochel is a well-studied ferrous iron amino acid chelate exclusively available through Albion Laboratories. Ferrous iron is reacted with glycine to form bisglycinate chelate, a non-electrically charged compound that is totally nutritionally functional. The absence of an electrical charge, uncommon for an iron supplement, makes it less likely that Ferrochel can interfere with absorption of other minerals such as calcium, vitamin E or vitamin C. Iron soluability from iron bisglycine chelate is not affected by pH changes from 2-6. As such, it travels through the stomach, into the intestine, where it is absorbed and released for transport throughout the body.

Ferrochel provides many unique attributes that support its superior role as an iron supplement. These include molecular size and ionic charge, stability, non-reactivity, bioavailability and tolerability.

Iron is an essential nutrient in human health, playing a role in immune function, cardiovascular health and cognitive development. While iron can be found in vegetables (spinach, corn) and beans (soybeans, kidney beans), its bioavailability is poor; iron found in meat is much more bioavailable. Iron deficiency is the most commonly occurring nutrient deficiency. In the United States alone, the Centers for Health Statistics estimates 12 percent of women of child-bearing age are anemic, while 10 percent of seniors have iron-deficiency anemia The World Health Organization reports that 1.3 billion people suffer from iron deficiency anemia.