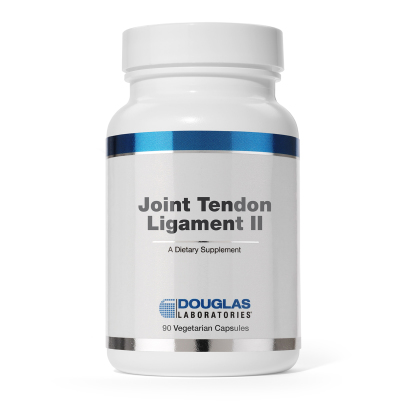 Joint, Tendon, Ligament II is a unique formula designed to support healthy stem cell function that can contribute to healthy joints and tissues.† Specific nutrients, such as Vitamin C and Pterostilbene have been shown to support normal mesenchymal cell growth, migration and proliferation. † The combination of Lcarnosine, vitamin D3, green tea, and blueberry have been studied for their ability to influence stem cell activity.† Dr. Martin Gallagher, M.D., D.C. has developed the Joint, Tendon, Ligament formulas to use for musculoskeletal support and in conjunction with regenerative therapies, such as prolotherapy, PRP, acupuncture, and manipulation. Joint, Tendon, Ligament I and II can be taken together for optimal results.

FUNCTIONS Maintaining optimal tissue and joint health is dependent in part upon the activation of healthy, endogenous stem cells, particularly mesenchymal cells. Mesenchymal stem cells (MSCs) differentiate into multiple cell types and have demonstrated the ability to migrate through the peripheral circulation to the site where they may be most needed. Stem cells are found in many organs, including bone marrow, peripheral blood, umbilical cord, spleen and brain. Research is evolving to discover how to optimize endogenous stem cell production and health in adults to promote self-healing. Specific nutrients may help contribute to stem cell stimulation and migration to support tissue, tendon, and ligament health. Pterostilbene, a methylated resveratrol, supports healthy apoptosis, which has been suggested to be an important factor in influencing targeted migration of stem cells from blood to tissues.† Pterostilbene can also support tissue health by down regulating iNOS and COX-2 gene expression.† pTeroPure™ pterostilbene is a nature identical form of trans-pterostilbene, a stilbene found in certain berries and considered a methylated form of resveratrol. Pterostilbene has greater lipophilicity, a longer half-life and a higher potential for cellular uptake than resveratrol. Researchers have reported that vitamin D3, L-carnosine, blueberry and green tea produce a synergistic effect to promote proliferation of human stem cells, also called hematopoietic progenitors.† In vitro studies demonstrate that vitamin D3 has a dramatic effect on stimulating the proliferation of progenitor cells. Blueberries, known for their significant antioxidant activity have demonstrated the ability to modulate cell signaling activity, while green tea active compounds may promote normal cellular growth.† Folate, supplied as the bioavailable methylfolate, and vitamin B-12 as methylcobalamin play important roles in erythropoiesis (red blood cell formation), and low levels of these nutrients can result in less than optimal cellular health. Metafolin® is a patented, natural form of (6S) 5-methyltetrahydrofolate (5-MTHF) and is the naturally occurring, predominant form of folate commonly found in cells. Vitamin C (ascorbic acid) has been shown to positively modulate mesenchymal stem cell proliferation and motility via hepatocyte growth factor (HGF). Hepatocyte growth factor is secreted by mesenchymal cells and acts as a multi-functional cytokine on cells of epithelial origin. Additionally, recent in vitro research has shown that vitamin C was able to induce telomerase activity in periodontal ligament stem cells and enhance the expression of type I collagen, fibronectin, and other markers of tissue health. Vitamin K together with vitamin D has been shown to increase osteoblast markers in human MSCs isolated from fracture sites. These nutrients may therefore play an important role in support of bone and tissue health.†

As a dietary supplement, adults take 3 capsules daily with a meal or as directed by a healthcare professional.

Metafolin is a registered trademark of Merck KGaA, Darmstadt, Germany

WARNING: This product contains Vitamin K, which interferes with the prescription drug Coumadin (Warfarin). If taking this drug, consult your physician prior to use.