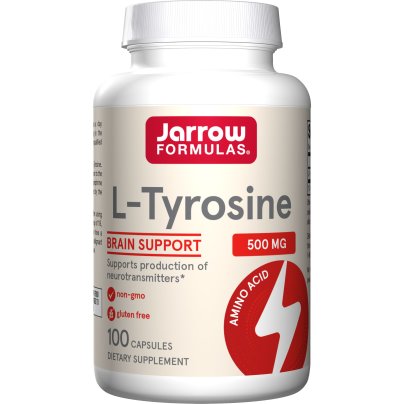 L-Tyrosine, a constituent of dietary protein, is a substrate or precursor to the catecholamine neurotransmitters norepinephrine, epinephrine and dopamine, the levels of which can be affected by the amount of tyrosine consumed.* Jarrow Formulas® L-Tyrosine contains pure crystalline L-Tyrosine.

Take 1 capsule 1 or 2 times per day on an empty stomach, immediately after arising in the morning, preferably with juice as a carbohydrate source or as directed by your qualified healthcare professional.

NOTE: If you have a medical condition (especially bipolar or a history of malignant melanoma), are pregnant, lactating, trying to conceive, under the age of 18, or taking medications (especially MAO inhibitors), consult your healthcare professional before using this product.

Keep out of the reach of children.