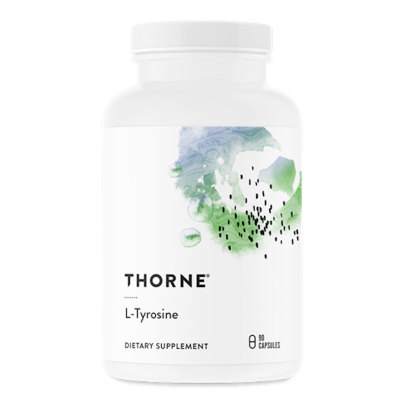 SKU: THO-SA514
L-tyrosine plays an important role in the central nervous system, the thyroid, and the adrenal glands.* It is an amino acid precursor for the synthesis of the brain-friendly neurotransmitters norepinephrine and dopamine.* By improving the rate of neurotransmitter production and stimulating the central nervous system, L-tyrosine helps relieve the physical symptoms of stress, such as mood swings. Chronically stressed individuals might not efficiently convert phenylalanine to tyrosine, which makes supplementation with L-tyrosine desirable.* L-tyrosine also serves as a precursor for the thyroid hormone thyroxine and for melanin, the pigment that protects against harmful ultraviolet rays.* L-tyrosine stimulates growth hormone, is involved in adrenal and pituitary function, and is a powerful antioxidant, neutralizing free radicals and inhibiting fat oxidation.*

L-tyrosine is a conditionally essential amino acid because under normal conditions the body synthesizes sufficient quantities of it from phenylalanine. For individuals who have phenylketonuria, however, a severe deficiency in the enzyme phenylalanine hydroxylase prevents the conversion of phenylalanine to tyrosine, making tyrosine an essential amino acid for this population. Tyrosine is incorporated into proteins and is a precursor for the synthesis of thyroxin, melanin, and the neurotransmitters dopamine and norepinephrine. Food sources of tyrosine include fish, soy products, poultry, eggs, dairy products, lima beans, almonds, peanuts, sesame seeds, pumpkin seeds, wheat germ, oats, avocados, and bananas.

Although tyrosine has numerous mechanisms of action, perhaps its most clinically significant one is its role as a precursor to norepinephrine and dopamine synthesis. By improving the rate of neurotransmitter synthesis, tyrosine stimulates the central nervous system, which improves mood.* Tyrosine also serves as a precursor for melanin, the pigment responsible for skin and hair color that provides protection against harmful ultraviolet rays, and for the thyroid hormone thyroxine.* Tyrosine is involved in adrenal and pituitary function, and it also appears to function as an adaptogen by relieving physical symptoms of stress.* Because of its phenolic structure, tyrosine is a powerful antioxidant, scavenging and neutralizing numerous free radicals and inhibiting lipid peroxidation.*
Take 1 capsule three times daily or as recommended by your health professional.

This product is contraindicated in an individual with a history of hypersensitivity to any of its ingredients.

If pregnant do not use this product.