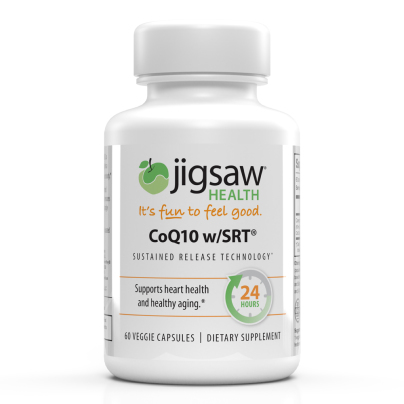 MICROACTIVE® COQ10 IS CLINICALLY PROVEN FOR:

MicroActive® CoQ10 complex in crystalline form supports uniform absorption and time release claims. In addition, if taken at higher doses, claims for heart and circulatory health benefits can be made, and can provide assurance of doubling CoQ10 levels in three weeks.*

WHAT IS MICROACTIVE® COQ10?

MicroActive® CoQ10 w/SRT® uses non-GMO potato starch converted to ß-cyclodextrin. The ß-cyclodextrin is what encapsulates the CoQ10, allowing the CoQ10 to become water-dispersible. This ensures better, more efficient absorption in the body.

WHY DO CYCLODEXTRINS INCREASE THE BIOAVAILABILITY OF MICROACTIVE® COQ10?

CoQ10 has poor bioavailability in the body because the molecule size is too large to pass through the intestinal wall for absorption. Jigsaw MicroActive® CoQ10 w/SRT® solves this issue by using cyclodextrins in the manufacturing process.

Each molecule of CoQ10 is joined with two cyclodextrin molecules, forming a complex. In the process of forming the complex, CoQ10 is reduced to its molecular size. The CoQ10 molecules are then prevented from reaggregating because the cyclodextrin in the complex keeps them separated, making the MicroActive® CoQ10 micronized.

The second benefit derived from cyclodextrins is that they render the hydrophobic CoQ10 molecule water-dispersible. This happens because the CoQ10 enters the hydrophobic cavity in the cyclodextrin molecule. The outer surface of the cyclodextrin is hydrophilic, which makes the molecule water-soluble/dispersible. Thus, the complex of the two becomes water-soluble and more easily transported to the absorption site in the small intestines.

As a dietary supplement, take 1 veggie capsule daily, or use as directed by your healthcare professional.