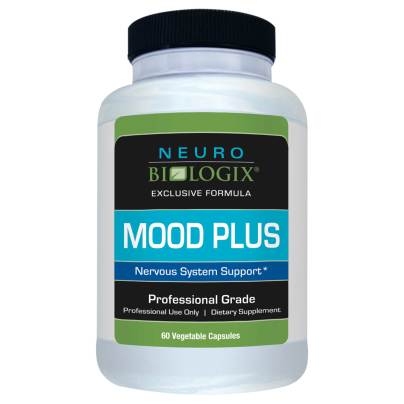 SKU: NEU866-15
Enhanced Neurological and Nervous System Support*
Recommended for mood support, sleep disturbances, poor libido and to maintain a healthy level of stress.*
MoodPlus™ features a carefully formulated combination of nutrients that function as neurotransmitters to support the overall nervous system and promote a healthy mood. Magnesium is important for vital cellular functions including cell proliferation and signal transduction. 5-HTP, SAM-e and DMAE are included for their important role in serotonin synthesis. 5-HTP and GABA have shown in research studies to enhance endorphin levels and result in a mood lightening effect as well as calming effect.*

MoodPlus™ includes 5-HTP which is a drug free amino acid derived from a plant that naturally increases the body's level of serotonin, the chemical messenger that affects emotions, behavior, appetite and sleep. Today's stress-filled lifestyles and diet regimens may negatively affect how the body handles serotonin.

From a whole-body standpoint, inhibitory neurotransmission by GABA has positive effects on neuromuscular relaxation. Accordingly, increased levels of GABA in the central nervous system (CNS) can result in relaxant effects as well as alleviating symptoms of nervousness and mood instability. In fact, the concept that GABA deficiencies or dysfunctions contribute to various mood issues and (CNS) issues (the GABAergic hypothesis) has become increasingly prominent in the scientific literature.*

5-HTP (Hydroxytryptophan) is a naturally occurring amino acid and chemical precursor in the biosynthesis of neurotransmitters serotonin and melatonin. Several studies have shown that 5-HTP supports a healthy mind, ease of movement and restful sleep.*

Magnesium in general is essential for the survival of our cells but takes on further importance in the age of toxicity where our bodies are being bombarded on a daily basis with heavy metals. Glutathione requires magnesium for its synthesis. Without the cleaning of glutathione (magnesium) cells may begin to decay as filth and heavy metals accumulates.*

Ashwagandha: A human clinical study conducted in India involving 50 women was published in the journal Biomedical Research International. Entitled “Clinical Study Efficacy and Safety of Ashwagandha (Withania somnifera) Root Extract in Improving Sexual Function in Women: A Pilot Study," the study tracked participants who had been given Ashwagandha root extract daily for eight weeks. Women in the study who took the ashwagandha root extract experienced significant improvement in sexual arousal, lubrication, and overall satisfaction.*
Take 1 capsule twice daily or as directed by your healthcare practitioner. Not intended for Children.

Other Ingredients: Hypromellose (Capsule), Microcrystalline Cellulose, Natural Vanilla Flavor, Ascorbyl Palmitate, Silicon Dioxide.
Caution: Individuals taking medication (especially those for depression, migraines or psychiatric disorders) should discuss potential interactions with their healthcare practitioners. Not for use by children unless recommended by your healthcare professional. Do not use with other dietary supplements containing L-tryptophan, St. John's wort or Hawaiian baby woodrose. Do not take if you are, or suspect you are, pregnant or lactating.