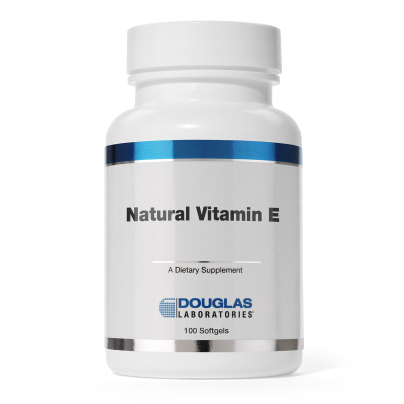 FUNCTIONS Vitamin E is the collective term for those eight compounds that have varying levels of vitamin E biological activity. These eight fat soluble compounds include the alpha, beta, gamma, and delta forms of tocopherol and tocotrienol. The most biologically active of this group is alpha tocopherol.

Vitamin E is one of the body’s most important antioxidant nutrients. Antioxidants protect healthy cells from oxidative and free radical damage. Free radicals are unstable chemicals formed in the body during metabolism and from exposure to environmental sources, such as air pollution and cigarette smoke. Free radicals are necessary for energy metabolism and immune function, but when an excessive number of free radicals are formed, they can attack healthy cells, especially their membrane lipids, proteins, and nucleic acids. This, in turn, is thought to degrade the structure and function of healthy cellular components.

Vitamin E is an especially valuable antioxidant in the cell membranes, where it prevents oxidation of unsaturated fatty acids by trapping free radicals. This helps stabilize and protect cell membranes, especially red blood cells and tissues sensitive to oxidation, such as the lungs, eyes, and arteries. Vitamin E also protects the liver and other tissues from the free-radical damage of toxicants, such as mercury, lead, ozone, nitrous oxide, carbon tetrachloride, benzene, cresol, and various drugs. Related to its antioxidant properties, vitamin E is important for normal immune function, and many studies show that it prevents lipid peroxidation of blood lipoproteins, such as LDL-cholesterol.

Intestinal absorption of vitamin E is associated with fat absorption. Some dietary fat must be present for efficient vitamin E absorption to occur. Studies show that natural d alpha tocopherol is more efficiently absorbed and has significantly higher bioavailability than synthetic dl-alpha tocopherol. Once absorbed, vitamin E is transported into the circulatory system via chylomicrons, and then transferred to VLDL, LDL and HDL particles. Tissues slowly accumulate vitamin E from these plasma lipoproteins. Liver and adipose tissues have the highest concentrations, but muscle also accounts for a large proportion of vitamin E stores in the body.

INDICATIONS Natural Vitamin E Complex 400 I.U. may be a useful dietary supplement for those who wish to increase their daily intake of vitamin E in its potent, natural form.

KEEP OUT OF REACH OF CHILDREN.

Tamper resistant package, do not use if outer seal is missing.

*These statements have not been evaluated by the Food and Drug Administration.
This product is not intended to diagnose, treat, cure, or prevent any disease.