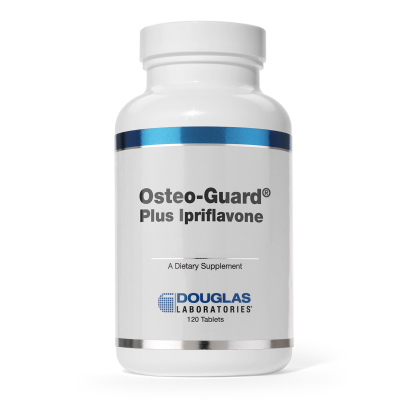 FUNCTIONS Numerous studies of postmenopausal women and individuals whose bones are showing signs of demineralization have investigated the benefits of Ipriflavone on bone health. Laboratory and clinical studies have documented ipriflavone’s positive effect on bone density. Experts agree that ipriflavone appears to directly inhibit osteoclast activity, thereby decreasing bone resorption. Osteoclasts and osteoblasts are the two primary types of bone cells. Osteoblasts, the more exterior cells, are responsible for bone mineralization. Osteoclasts, found beneath the osteoblasts, are responsible for bone resorption. When calcium levels in the blood drop, the osteoblasts change shape, allowing the osteoclasts to become exposed and release calcium from the bones to the rest of the body. Scientists suspect ipriflavone may also stimulate osteoblast activity. As osteoblasts are responsible for laying down new bone, an increase in osteoblast activity would result in increased bone mineralization. This suggests ipriflavone may not only inhibit the breakdown of existing bone, but also encourage the formation of new bone. Bone is constantly turning over in a continuous process of formation and resorption. During certain stages of life, the balance between bone mineralization and resorption may be tipped. During childhood and adolescence, while the body is growing, bone mineralization generally exceeds bone resorption. Once one reaches peak bone mass, sometime between the age of 20 and 30, bone formation often declines. For many, bone resorption begins to prevail over bone formation, beginning the cycle of progressive, age-associated bone demineralization. In women, bone loss is generally accelerated following menopause. The decline in estrogen levels associated with menopause appears to put women at increased risk for declining bone density and osteoporosis. Osteoporosis affects a large proportion of postmenopausal women and the elderly in developed countries. For some women, exogenous hormones provide some continued protection against accelerated, progressive, postmenopausal bone loss. Currently, there are few effective options for those women who are unable to, or choose not to take hormone replacement therapy (HRT). It is generally accepted that obtaining enough dietary calcium throughout life can significantly decrease the risk of developing osteoporosis. Among other factors, such as regular exercise, gender and race, calcium supplementation during childhood and adolescence appears to be a prerequisite for maintaining adequate bone density later in life. But even elderly, osteoporotic patients can benefit significantly from supplementation with dietary calcium. Ipriflavone, together with adequate calcium, vitamin D, and other key nutrients in bone health, offers non-estrogenic protection against excessive bone resorption. Unlike other well-known isoflavones, such as genistein found in soy foods, ipriflavone does not have estrogenic activity. Ipriflavone can be safely used in conjunction with natural phytoestrogens or with HRT. Further, ipriflavone provides a positive effect on bone health in women for whom hormone therapies are contraindicated. Both vitamin K and boron appear to have important roles bone metabolism. Vitamin K1-dependent proteins appear to have important regulatory functions in calcium metabolism and bone mineralization. Boron affects the composition, structure, and stren

As a dietary supplement, adults take1 tablet daily with food or as directed by your healthcare professional.

WARNING: This product contains Vitamin K, which intereferes with the prescription drugs Coumadin and Warfarin. Do not take this if taking either of these drugs.