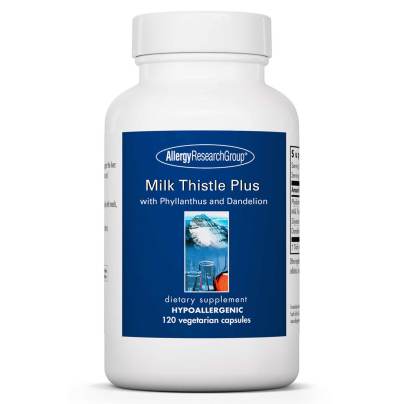 A combination of traditional herbal foods. Phyllanthus amarus is an Indian herb that has been used for more than two thousand years by Ayurvedic practitioners for liver support. Milk thistle seeds contain flavonoids that exhibit a hepatoprotective effect, as well as being involved in phase II liver detoxification by preventing the depletion of glutathione. Dandelion root has been used world-wide in the support of liver and gallbladder function. The body uses dandelion root to increase the production of bile in the liver and in supporting its release from the gallbladder. Dandelion is believed to have originated in Central Asia where it was used as a liver tonic.*

Suggested Use:
As a dietary supplement, 1 capsule two or three times daily with meals, or as directed by a healthcare practitioner.

Variations in product color may occur.

This nutrient is of the highest quality and purity obtainable, are free of all common allergens (antigens), and does not contain preservatives, diluents, or artificial additives.