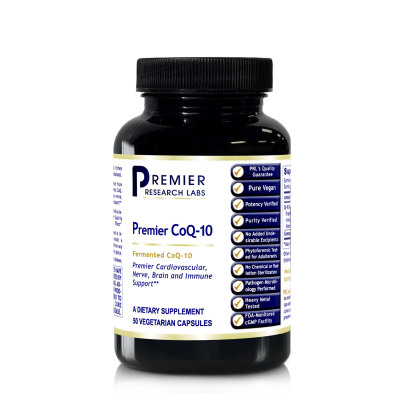 SKU: PRE512-462
FERMENTED CoQ-10 We recommend Premier CoQ-10 (ubiquinone) as the wise product of choice when selecting your CoQ-10 dietary supplement. Our CoQ-10 is produced through a fermentation process which yields 100 mg/capsule of the highly bioavailable, preferred trans isomeric form of CoQ-10. Our process does not use polysorbate 80 (an emulsifier made from polyethoxylated sorbitan), undesirable flowing agents or other excipients. The trans-isomer of CoQ-10 is the most desirable because it is identical to the CoQ-10 produced by all cells in the body. CoQ-10 is found in the highest concentrations in tissues with the highest rate of metabolic activity and energy demands (such as in the heart, muscle, liver, kidney and brain).

CoQ-10 – GET THE FACTS As a supplement, CoQ-10 can be found in the marketplace as oxidized ubiquinone or reduced ubiquinol (in an assortment of liposomal, micelle and nanoparticle forms). These two forms are converted from the oxidized to the reduced form and vice versa as needed by the body. Reduced ubiquinol is highly unstable and is readily converted to oxidized ubiquinone in the presence of oxygen, light, and an acid media such as hydrochloric acid produced by the stomach. Further, reducing

CoQ-10 to a nanoparticle such as CoQ-9, 8 or 7, by cutting off its lipophilic tail is not a process. Although it does become more water soluble, the CoQ-10 molecule has been lost. Ubiquinol products in the liposomal, micelle or nanoparticle form are water-soluble microspheres can rapidly disperse in water, but this does not enhance the absorption of this altered form of CoQ-10 in the intestines. For best performance, the CoQ-10 molecule must be absorbed by the intestines in its complete lipid form, its true form, for optimal nutrition. BUYER ALERT! The preferred form of CoQ-10 is its, original form! Look for live-source CoQ-10 (ubiquinone) in the trans isomer form, derived from fermentation as found in Premier CoQ-10.

Don’t be awed by more expensive, water-soluble CoQ-10 as ubiquinol which has been altered to make it more water soluble. When this un form of CoQ-10 hits the acid media of the stomach, it becomes oxidized into the ubiquinone form. It is the lipid-soluble form of CoQ-10 that is needed to be absorbed by the intestines. Unaltered, ubiquinone as in Premier CoQ-10 is preferred because it is in its original, fat-soluble state. Now you can make the wise choice in selecting CoQ10 in its form to receive the wide range of famous benefits, including cardiovascular, nerve, brain and immune support.*