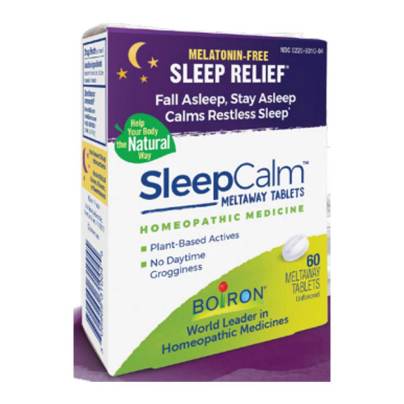 SleepCalm 60t is made by Boiron, world leader in homeopathy. For more than 70 years, Boiron has been committed to funding scientific research and educating the public and healthcare professionals about homeopathic medicines.

For temporary relief of occasional sleeplessness and/or restless sleep.

(Adults and children 12 years and over) Dissolve 2 tablets in the mouth in the evening and 2 tablets at bedtime. (Children under 12 years) Ask a doctor.

If pregnant or breast-feeding, ask a health professional before use.

Ask a doctor before use in children under 12 years of age.

Do not use if blister seal is broken.

Stop use and ask a doctor if symptoms persist continuously for more than 2 weeks or worsen.

Insomnia may be a symptom of serious underlying illness.