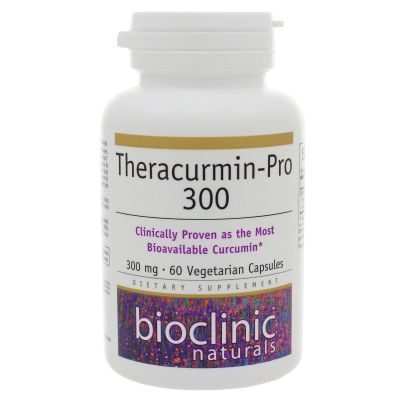 The well known benefits of curcumin, a polyphenolic extract of turmeric, have been attributed to powerful anti-inflammatory and antioxidant effects. Curcumin has many molecular targets, such as the enzymes cyclooxygenase and lipoxygenase, the NF-KB signaling pathway, a critical mediator of inflammation, as well as the enzyme p300, a contributor to diabetic and cardiovascular complications.

The limiting factor in curcumin’s efficacy has been its poor systemic bioavailability as it is poorly absorbed in the gastrointestinal tract and rapidly metabolized.2, 3 Advanced manufacturing techniques have reduced its particle size over 100-fold, and combining the use of natural emulsifiers to form a colloidal suspension has tremendously increased curcumin’s bioavailability, significantly increasing blood levels of curcumin many times that of other preparations, including so-called enhanced forms of curcumin.4, 5 Theracurmin increases curcumin levels in a linear and dose-dependent manner, bypassing previous limits to curcumin supplementation to achieve unparalleled blood levels of curcumin.

1–2 capsules per day or as directed by a health care professional.

Sealed for your protection. Do not use if seal is broken. For freshness, store in a cool, dry place

Caution is advised when taking with anticoagulant medications. Curcumin has been shown to enhance the effect of some chemotherapeutic medications, as well as inhibit the effect of others, and should only be used under medical supervision by those receiving chemotherapy. A reduction in the dose of medications used to treat diabetes may be necessary, as curcumin enhances the effect of insulin.

*These statements have not been evaluated by the Food and Drug Administration. This product is not intended to diagnose, treat, cure, or prevent any disease.