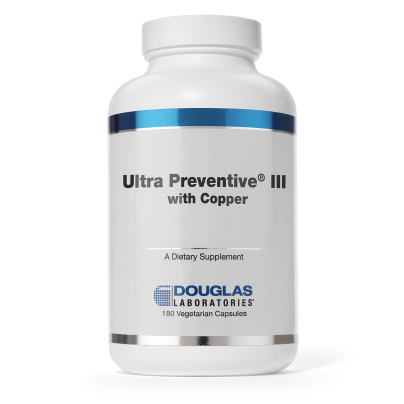 Douglas Laboratories is proud to announce that Ultra Preventive III with Copper now contains Metafolin, a patented, natural form of (6S) 5-methyltetrahydrofolate (5-MTHF) as well as 1, 000 IU of vitamin D3 per serving. 5-MTHF is the naturally occurring, predominant form of folate commonly found in cells and is essential for overall health, as it participates as a cofactor in a reaction that involves the remethylation of homocysteine to methionine. Unlike synthetic folic acid, 5-MTHF can be used directly by the body, without the need for an additional conversion via the enzyme (5, 10-methylenetetrahydrofolate reductase (MTHFR)). In certain populations, the body’s ability to convert folic acid to 5-MTHF by use of this enzyme may be compromised due to genetic differences. Metafolin contains only the S isomer of 5-MTHF and has been shown to be the only form of folate to be able to cross the blood-brain barrier. Additional vitamin D3 (also known as cholecalciferol) has been added to this formula as numerous scientists now feel that supplementation with vitamin D at levels greater than previously thought necessary is critical to helping maintain overall health.

FUNCTIONS Studies show that a high percentage of adults and children in North America and other developed countries eat less than the minimum daily allowance of 10 or more essential nutrients. Adequate amounts and proper balance of these nutrients are needed not only for maintaining good health, but also for the dietary management and prevention of chronic diseases. Ultra Preventive III with Copper has been carefully developed to contain the right proportions of vitamins, minerals, and trace elements without danger of toxic build-up and without side effects. Each ingredient is selected in consideration of its absorbability, competitive relationship with other nutrients, allergenic potential, and long-term safety. Certain nutrients are purposely omitted (phosphorus); others, such as beta-carotene, vitamin C, vitamin E and B-complex vitamins are included in high-potency amounts because of the vital roles they play in antioxidant protection, energy production and maintenance of healthy blood cells, nervous system, hormonal balance, and more. Minerals and trace elements are provided in their safest and most bioavailable forms, such as amino acid chelates and other scientifically validated and clinically superior forms. Copper is an essential trace element and functions as a cofactor of many enzymes involved in antioxidant defense (superoxide dismutase), connective tissue metabolism (lysyl oxidase), and amine metabolism (amine oxidases).

As a dietary supplement, adults take 6 capsules daily or as directed by your healthcare professional. This product is best taken with meals.