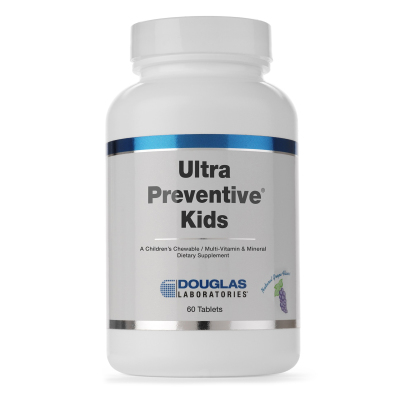 Ultra Preventive® Kids is more than just another children’s multivitamin-mineral supplement. Research shows that going beyond RDA amounts of many vitamins may have significant positive effects on the structure and function of growing bodies.† Ultra Preventive® Kids provides important antioxidant vitamins C and E, a complete vitamin B complex, calcium and magnesium, as well as a full spectrum of bioavailable trace elements. Additionally, Ultra Preventive® Kids now features Metafolin® methylfolate and B12 as methylcobalamin, which are bioavailable methylated versions of B vitamins that the body can utilize without conversion. Lutein is added for its benefits to children’s developing eyes.Ultra Preventive® Kids uses only the purest, most hypoallergenic ingredients and contains no artificial colors, flavors or preservatives.

FUNCTIONS
Studies show that a high percentage of children in North America and other developed countries eat less than the minimum daily allowance of many essential nutrients. Adequate amounts and proper balance of these nutrients are needed not only for maintaining good health, but also for satisfying the special nutritional demands of growth and development during childhood. † Ultra Preventive® Kids has been carefully designed and formulated to contain the right proportions of vitamins, minerals, and trace elements without danger of toxic build-up and without side effects. Each ingredient is selected in consideration of its absorbability, competitive relationship with other nutrients, taste, allergenic potential, and long-term safety. Adequate vitamin D has been included in this formula, as new research indicates that both children and adults may not receive enough of this nutrient due to reduced sun exposure and limited dietary sources. Vitamin D plays many roles in the body and is vital for supporting strong healthy bones. † Choline, a nutrient related to B vitamins, is important for optimal neurological and liver health and is especially needed for children’s healthy, growing bodies.† This formula contains Metafolin®, a patented, natural form of (6S) 5-methyltetrahydrofolate (5-MTHF). Lmethylfolate is the naturally occurring, predominant form of folate commonly found in cells and is essential for overall health, as it participates as a cofactor in the methylation cycle. Unlike synthetic folic acid, L-methylfolate can be used directly by the body, without the need for an additional conversion via the enzyme (5, 10 methylenetetrahydrofolate reductase (MTHFR)). In certain populations, the body’s ability to convert folic acid to 5-MTHF by use of this enzyme may be compromised due to genetic differences. Metafolin® contains only the S isomer of 5-MTHF and has been shown to be the only form of folate to be able to cross the blood-brain barrier. Children often fall short in vegetable intake, particularly in regards to the consumption of dark green vegetables, which implies that young children may not get sufficient lutein and zeaxanthin in their diets. Since this period of time coincides with a period of significant macular development, which approaches adult maturity at about the age of 4, it may be prudent to increase the intake of dark green leafy vegetables or supplement with natural lutein in order to help support the maturing childhood eyes.†

INDICATIONS
Ultra Preventive® Kids is ideal for children that are at risk for vitamin, mineral and trace element deficiencies due to sub-optimal dietary intake and life style.

As dietary supplement, children chew two tablets daily with a meal or as directed by a healthcare professional.

WARNING
If you are pregnant, nursing, have any health condition or taking any medication, consult your health care professional before using this product.

KEEP OUT OF REACH OF CHILDREN

For optimal storage conditions, store in a cool, dry place.

Tamper resistant package do not use if outer seal is missing.