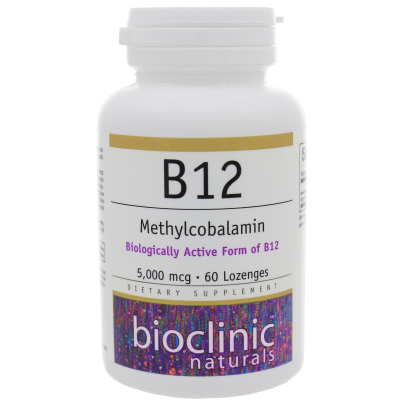 Vitamin B12 is the cofactor in enzymatic reactions with diverse physiological functions. It is required for the conversion of methylmalonyl CoA to succinyl CoA, as well as the conversion of homocysteine to methionine by methionine synthase, which is then converted into S-adenosylmethionine. A B12 deficiency causes impairments in both of these pathways, disrupting neurological function, including poor formation of myelin nerve sheaths, production of toxic levels of homocysteine, and inefficient energy production in all cells.

Because of its relationship to myelin production and neurological function, high dose B12 has been used in a variety of neurodegenerative diseases, including Parkinson’s disease, amyotrophic lateral sclerosis, and multiple sclerosis.

Some individuals, especially those with malabsorption or low dietary intake, are at higher risk for a B12 deficiency. Individuals with impaired absorption of B12 rely on passive absorption, which is typically 1% of the ingested amount. Thus high doses are required for those with greater B12 needs, such as elderly individuals and those with neurodegenerative disorders.

Benefits
•Superior to the more common form, cyanocobalamin as cyanocobalamin does not convert to enough methylcobalamin to correct some forms of anemia, neurological defects, and aging
•Methylcobalamin is the active form of vitamin B12 for maximum benefit
•Lozenges allow for fast acting delivery system directly into blood stream
•Lowers homocystein levels for protective cardiovascular benefits

1 lozenge per day or as directed by a health care professional. Chew or hold in mouth until dissolved.

B12 is contraindicated in patients with hereditary optic neuropathy, and may be cautioned against at high doses in oncology patients because of its role in DNA synthesis. Supplemental folic acid may mask a B12 deficiency, which should be ruled out, and folic acid and increased potassium intake is recommended with B12 therapy. B12 is considered safe in pregnant and lactating women, and may be indicated in children with a low dietary intake.

Drug Interactions: Although several classes of drugs, such as aminoglycosides, anticonvulsants, bile acid sequestrants, and proton pump inhibitors are known to either interfere with B12 absorption or function, there are no known negative interactions caused by B12 supplementation with any medications. B12 may enhance the function ore reduce the adverse effects of several medication classes, such as SSRIs and oral contraceptives.