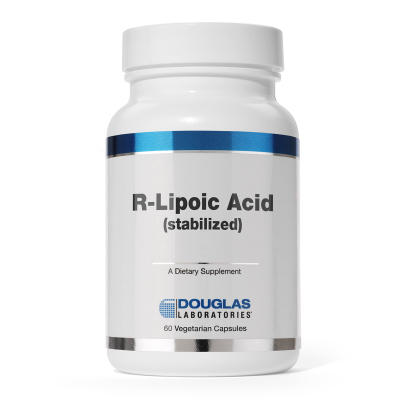 R-Lipoic Acid capsules, provided by Douglas Laboratories, contain 100 mg of pure R-lipoic acid. The R-lipoic acid isomer used in this formulation is provided in a stabilized form as potassium-R-lipoate and does not contain any S-lipoic acid.

FUNCTIONS Lipoic acid is a nutritional coenzyme that participates in the energy metabolism of proteins, carbohydrates and fats, with a particular role in blood glucose disposal. It is also able to scavenge a number of free radicals. As both a fat and water-soluble, sulfur-containing coenzyme, lipoic acid functions in the body as part of several multi-enzyme complexes located in the mitochondria. Lipoic acid is essential for metabolizing carbohydrates, proteins, and fats, for the conversion of their energy into ATP. Two of these enzyme complexes, pyruvate dehydrogenase (PDH) and alpha-ketoglutarate dehydrogenase (KGDH) are part of the citric acid cycle (Krebs cycle), and as such assume a central role for general energy production. Another lipoic acid containing enzyme complex, branched-chain keto-acid dehydrogenase (BCKADH), is involved in deriving energy from the branched chain amino acids, leucine, isoleucine, and valine. A related metabolic function of lipoic acid is its role in blood glucose disposal. This important coenzyme appears to be necessary for the normal transport of blood glucose into the cell. This may be explained by its functions in the glucose-metabolizing enzymes, PDH and alpha-KGDH, but some researchers suspect a more direct role in cellular glucose uptake at the cell membrane. As early as 1959, lipoic acid was suggested to be an antioxidant, since it could extend the actions of vitamin C in guinea pigs, and those of vitamin E in rats. It is only recently, however, that the specific actions of lipoic acid in free radical quenching, metal chelation, and antioxidant regeneration have been investigated. Body cells and tissues are threatened continuously by damage caused by toxic free radicals and reactive oxygen species (e.g., peroxides) which are produced during normal oxygen metabolism, and by toxic agents in the environment. Free radicals, once formed, are capable of disrupting metabolic function and cell structure. When this occurs, additional free radicals are produced which, in turn, can result in more extensive damage to cellular structure and function. Lipoic acid is unique among biological antioxidants, because it is soluble in both water and lipids. This allows it to neutralize free radicals just about everywhere in the body, inside and outside the cells. Due to its unique sulfur-containing structure, lipoic acid can scavenge several types of free radicals, such as the highly reactive hydroxyl, and singlet oxygen free radicals. It is also capable of suppressing the generation of free radicals in the first place, since lipoic acid chelates transition metals, such as iron and copper. Because lipoic acid is involved in so many different antioxidant functions in virtually all body tissues, it has been called the universal antioxidant. Many lipoic acid products contain a racemic mixture of both the R and S enantiomers of lipoic acid. The R-enantiomer of lipoic acid is naturally occurring, and has received special attention as studies indicate it may be better utilized by the body than a racemic mixture.

INDICATIONS R-lipoic acid may be a beneficial dietary supplement for individuals who wish to supplement with lipoic acid.

As a dietary supplement, adults take 1 capsule daily or as directed by
your healthcare professional.

Other ingredients: Cellulose and sodium carbonate.